This incident struck horror in my grandmother!

In the late summer of 1955 I was 5 years old. I was accompanying my grandmother Daisy Mae though southern Maryland to North Carolina to visit relatives when the bus we were riding in made a rest stop. My granny asked if I had to go to the bathroom, I said no, but she did. She asked the bus driver if he would look after me while she ran inside. She took too long, and as kids do, I wondered off looking for her.

What I remembered next took years to process and at first was difficult to understand. I remember women shrieking and my grandmother running up to me, putting her sweater over my head and rushing me back onto the bus. She kept saying, “He’s just a little boy, he knows no better!”

As it happened, in this land of Jim Crow, I wandered into the white women’s bathroom just weeks after Emmett Till, a 14 year old was brutally murdered for whistling at a white woman. I remember my grandmother saying over and over,

“You should have stayed put, why did you wonder off?” She was shaking and in tears.

Years later we would talk about that incident, the time when she feared for my life, simply because being a kid, I did not follow the rules of race laid down by the segregated and racist south. It saddened me because of all the strengths I saw in this woman, this one moment of powerlessness was imprinted into my memory at a very young age.

The strength of my grandmother would not to allow me to show hatred toward race, but defiance in the face of ignorance, scapegoating and bigotry. She and my mother, as single parents, raised me to have incredible tolerance, cultural appreciation and open mindedness when it came to understanding the people in the world around me.

This is why I am so conflicted by the 2016 presidential campaign. Being old enough to have experienced such hateful events of America’s past, I shutter at the thought of the racially charged dystopian view of politicians and their surrogates who espouse rolling back the clock under the guise of ‘making America great again!’

America is best when it moves forward. To really be great, America has no room for scapegoating immigrants, misogyny, racial profiling, denying women the right to make decisions governing their own bodies. America needs leadership that promotes pride and competence on the world stage, where intellectual accomplishments are appreciated and decisions are made based on knowledge, not impulse, overt racism, racial bias or personal greed.

My grandmother’s spirit will guide my hand when I walk into the voter booth come November 8th! 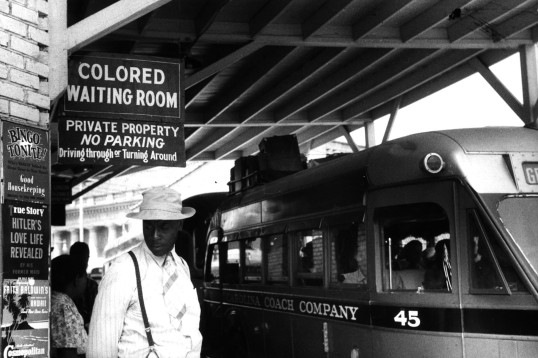 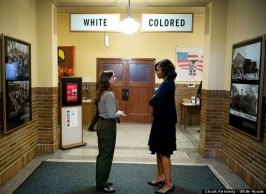 First Lady Michelle Obama tours the Brown v. Board of Education National Historic Site in Topeka, Kan., May 16, 2014. Stephanie Kyriazis, Chief of Interpretation and Education, leads the tour. (Official White House Photo by Chuck Kennedy) This official White House photograph is being made available only for publication by news organizations and/or for personal use printing by the subject(s) of the photograph. The photograph may not be manipulated in any way and may not be used in commercial or political materials, advertisements, emails, products, promotions that in any way suggests approval or endorsement of the President, the First Family, or the White House.