There is an awakening happening that is refreshing and positive in American political discourse. Just about everybody is talking more about the direction of the country, where we have been and where we are going. I love it!

I love it because for me, it sparks my curiosity to add more layers of historical knowledge to add to the emotions I feel. I hadn’t felt this way since I worked at KYW, which at that time was right across from the Liberty Bell in Independence Mall, the heart of old colonial Philadelphia. I would marvel, as I walked from my home in Society Hill past the first Treasury building, Independence Hall, the original meeting places of the first Continental Congress, finally to my office that overlooked the glass enclosed Liberty Bell right across the street.

I would actually well up with pride in America that my job, as a journalist and news manager was a mandate, part of the constitution and required me in word, deed and action to be a patriot. As an American, specifically as an African American, such responsibility was an important birthright, and I took my work in journalism very, very, seriously. 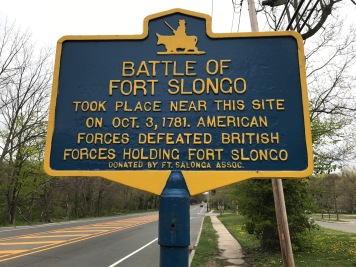 I guess that is why I was touched this week when I passed an historical marker in the Fort Salonga on Long Island, the town where I now live. The sign marked the spot of The Battle of Fort Slongo, Slongo being the name the Native Americans gave the area.

The Battle of Fort Slongo, depicted by Kevin Colton, kcscachets.com

The Battle of Fort Slongo was fought on October 3, 1781 between American Continental Army forces, under the command of Benjamin Tallmadge, and the British defenders of Fort Salonga, in the American Revolutionary War.

The fort was located near the border of present-day Huntington Township and Smithtown, New York, overlooking Long Island Sound. But the signpost is on route 25A nestled between Northport and Kings Park in what is now called the town of Fort Salonga.

The only American wounded in the battle was Sgt. Elijah Churchill who would personally be awarded a Badge of Military Merit by George Washington making him the first person to receive a Purple Heart. Churchill’s restaurant is a popular eating spot in the town. 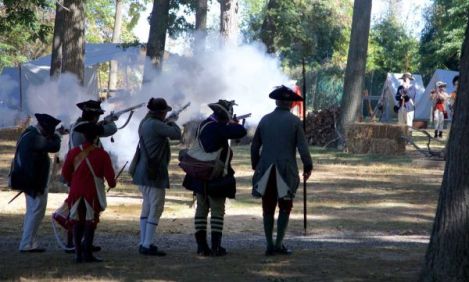 But I digress. From time to time the neighborhood (as rural as it is) gets out to do reenactments on Callahan Beach near where the fort actually stood, an educational experience that also included colonial crafts, costumes and lots of children with eager minds. It does not take much to experience history. Sometimes it is something as simple as observing and reading an historical marker. For me, I feel really lucky because history is alive in the spirit of Long Island, a place were patriotism helped build a great nation. And to tell the true history of our nation, you have got to tell the truth!