I Don’t Want To Believe In “Dog Whistle” Reporting, But The Case Is Made!

That shootout in Waco, Texas on Sunday May 17, 2015 between three rival biker gangs could be seen as an example of how right wing media pundits report serious crime when perpetrators are white. The shootout left nine gang members dead and 18 wounded by gunshot and stab wounds.  The New York Times reported that law enforcement sources called it “the worst violence in the Waco area since the 1993 siege on the Branch Davidian compound that left 86 people dead.”

But despite how heinous and craven that motorcycle gang shootout was by perpetrators known for random violence, reporting on it lacked the racial pathos and dog whistles seen in coverage of Baltimore and Ferguson

In an article written by Jenee Desmond Harris  for VOX, The Justice and Law blog, Ms. Desmond-Harris details how Twitter reacted to the reporting on the Waco violence. That post can be read here. It is food for thought that challenges even the most liberal views on how violence is reported when the perpetrators are white. 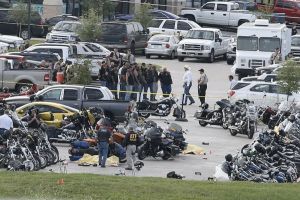