Giuliani’s “Stop and frisk” was hell on earth for decent men of color!

I was shocked to hear the words “Stop and frisk” come out of Donald Trumps mouth as a crime fighting panacea during one of his stump speeches a few weeks ago. I knew immediately it was the influence of one of his surrogates Rudy Giuliani urging him to float it as a trial balloon to make him look tough on crime, to throw it out there as some red meat to augment his “Law and order candidate” moniker. But I became very fearful when he brought it up again during the first debate with Hillary Clinton. Donald Trump gave a special shout out to Giuliani as though Rudy’s New York had the answer to gun violence that somehow escaped today’s inner cities.

Fact of the matter is Rudy Giuliani’s New York with it’s “Stop and Frisk” doctrine was hell on earth for men of color. What Donald Trump, Rudy Giuliani and many other middle aged, middle class privileged white men chose to ignore is that the indiscriminate nature of “stop and frisk” did more harm than good. It was the law of diminishing returns creating more animosity, mistrust, anger, humiliation and outright hatred in communities of color that those of us who loved our city found difficult to repair. And for the record, this method is not only applied to young men, it is applied to all men of color, universally, regardless of all age or social status.

I can back this fact up personally! As the only Africa American male News Director in New York City in the ‘90’s, I had an extremely positive outlook toward the police, the political system and the courts. I ran my news organization with the utmost objectivity and carried myself with impeccable dignity. But on this one night in the fall of 1998, my wife, teenaged daughter and I were leaving the Times Square theater district after picking up our car from a parking garage. They wanted chips and soda so we stopped at a local bodega. As I stepped out of my car, two detectives in a taxi cab (they rode around unmarked in cabs back then) got out of their car, stopped me asked me what I was doing in the area. They wanted to know who were those women, where was I coming from, where was I going in rapid-fire questions.

I looked at them in bewilderment. My response was “Why are you asking and who are you?” One began to frisk me and I pushed back saying, “Don’t put your hands on me!” I then complained to them by saying, “I don’t know that you think, but I am with my wife and daughter, those women are not prostitutes, I’m not a criminal or a pimp and you have no right to pull me over or search me.” They stared me down, got in their car and left. Why did these two cops stop me? Because under “Stop and frisk,” THEY COULD! And believe me, there was no basis for this stop, 99 percent of all stop and frisk incidents in New York City under Rudy Giuliani were toxic, bitter and totally oblivious to the city’s white community.

So let’s be clear about the face of who is stopped and frisked. It is not just the young black man scruffily dressed, hat on backwards, dismissive. It could be a middle-aged man of color who an officer for his own reason might hold in contempt. It is a working class man who in the moment does not appear ‘deferential,’ so in the eyes of an officer might be deemed ‘suspicious.’

The danger here is the irreparable harm done to the psyche of minority communities. What happens when families see their loved ones literally accosted and humiliated by police in unjustified stops? How are unreasonable incidents perceived long-term by repeated incidents that do not make their communities safer, but heighten animosity with the legal authority. This does not compare to a more thoughtful approach of community policing, a doctrine that is in sync with the notion that those who wear blue are foremost to protect and serve.

When I first came aboard as News Director of WWOR Channel 9 in 1992, I was heir to a proud tradition of news reporting that broke the story of racial profiling nationally. Investigative reporter Joe Collum chronicled in his book, “Black Dragon: Racial Profiling Exposed,” how state troopers on the New Jersey Turnpike systematically stopped drivers of color based on their race. The station made viewers nationwide aware of how police were acting on racial impulses and bias as opposed to solid police work.

Stop and frisk was racial profiling run amuck. In the 8 years of Rudy Giuliani’s reign as mayor, I had been stopped three times. I was black, a professional, in my 40’s and minding my own business. One of the ludicrous reasons I was given while leaving friends to go to my car on the upper east side in 1996 was that I, “looked funny!” But no incident was more humiliating than being stopped in front of my wife and child as I exited my vehicle in the Times Square area in 1998.

Stop and Frisk continued through the administration of Michael Bloomberg. According to the New York City ACLU, about 685,724 people were stopped in 2011. Considering the population of NYC’s inner city was 8,244,910. In short, 1 in 12 New Yorkers were either stopped and frisked, or somebody else got your share of stopping and frisking, and there in lies the problem. At the end of the stop and frisk program 88% of those stopped were of color and only 10% were white according to the NYACLU.

There is no shortcut to solving the problems of inner city violence. Certainly subjugating a large segment of its population and holding it in contempt is not the answer. People-to-people activism, jobs, housing opportunities and a caring political structure that treats it population with respect and dignity is what will win out. And politicians should literally bite the bullet and pass some iron-clad gun laws!

We should reject at all cost race-based rhetoric that supports solutions that were already tried, and already made things worse! 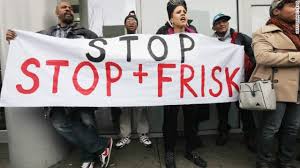 GOP Candidate calls for a national stop and frisk program as his answer to inner city violence. He cites Rudy Giulilani’s New York as a model to follow.

One thought on “Giuliani’s “Stop and frisk” was hell on earth for decent men of color!”